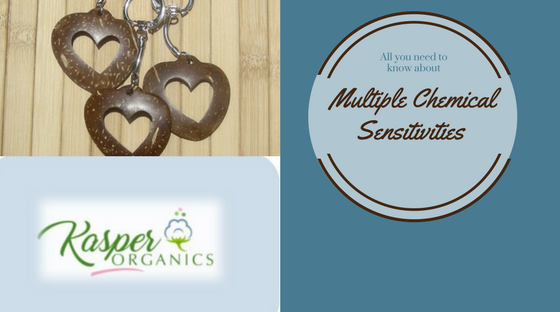 February 24, 2018November 30, 2018 kasperorganics - organic cotton
Multiple chemical sensitivities, or MCS, is a medical condition where a person has a  sensitivity to chemicals greater than the general population, and/or at lower concentrations. Exact numbers are difficult to obtain, but MCS is plaguing an increasing number of people each year.
People who have MCS become ill when exposed to a variety of chemicals, many of which are commonly encountered in everyday life: pesticides (food and clothing,) perfumes and colognes, and other scented products. Also fresh paint, new carpets, and many building materials. Not surprisingly; solvents, smoke, vehicle exhaust, industrial fumes can be culprits. And many cleaning products, even fresh ink. Also laundry detergents, air “fresheners,” fabric softeners, incense, most soaps, essential oils, shampoos and hair products, and body lotions. Pesticides and solvents are the main culprits. Symptoms can occur after inhaling, touching or ingesting these substances. A person with MCS may react to mold, pollen, animal dander, and dust, although the symptoms may be different from those of traditional allergies.
Some people have only mild chemical sensitivities, while others have a more severe form of the illness called MCS. Many people with MCS also have chronic fatigue syndrome or CFS.
It is difficult to determine how many people suffer from MCS, but it is safe to say that a large number of the population is affected by MCS issues, and many of them struggle significantly with even the basics of day-to-day life because of the health issues that have arisen as a result. An increasing number of doctors are recognizing MCS as well, and speculate the actual numbers of the population with MCS are quite large.
Multiple chemical sensitivities seem like kind of a generic name. To a certain extent, it needs to be. MCS is people reacting to chemicals, and there are so many chemicals in the world today that it can be quite costly, if even possible, to identify which specific chemicals someone is reacting to. One study stated that we are exposed to more chemicals in the first week of life than our grandparents were exposed to their entire lives. And new chemicals are being manufactured every day.  MCS is the term given to people who have some sort of reaction or sensitivity to these chemicals.

How do people get MCs?

For many individuals with MCS, their symptoms developed gradually over time. it can be difficult to say exactly how one gets an MCS, it’s not an illness like a cold that is spread. For many people, however, they can name a specific incident which occurred following which reactions begin to be noticed.
One of our customers began having sensitivities to chemicals after her work building was sprayed with everyone still inside! Other individuals note becoming chemically sensitive after being in an area that was crop dusted sprayed Airlie for mosquitoes or another sort of large exposure to chemicals while some people seem to develop MCS following about of a virus or health challenge for others the symptoms come on gradually and it can be a long and Rocky Road to finally determining MCS is that the root of their illness.
The severity of symptoms in people with MCS varies. Some individuals might experience anaphylactic reactions to exposure to certain chemicals, while others may experience symptoms milder that they pass them off as increasing annoyances. Obtaining a diagnosis of MCS can take many years and oftentimes it is through a lot of research and work on their own the MCS is finally identified.

We live in such a complex world that life with MCS can be truly overwhelming. Here are some of the tips traditionally given to MCS sufferers: